This term’s choral and orchestral concert took place in Holy Trinity Church. In front of a capacity audience of parents and staff, 200 performers took to the stage in what was the culmination of over a term’s worth of intense rehearsals and extremely hard work by pupils and staff alike.

The concert opened with Florence Price’s Concert Overture No.2. This symphonic overture for orchestra is typical of Price’s musical style and draws its melodic inspiration from three spirituals, Go Down Moses, Ev’ry Time I Feel the Spirit and Nobody Knows the Trouble I’ve Seen. The Symphony Orchestra deftly negotiated the demands of Price’s score, playing with both warmth and rhythmic energy. The depth of orchestral sound produced by such a young group of performers was truly impressive.

Under the baton of Dale Chambers, Concerto Consort took the platform with performances of Astor Piazzolla’s The Four Seasons of Buenos Aires. Originally composed as four separate pieces for violin, electric guitar, double bass, and bandoneon, it was not until various ensembles began to perform arrangements of these pieces that parallels to Vivaldi’s group of eighteenth-century violin concerti were made. This arrangement includes interpolations of Vivaldi’s original with notable solos for violin and cello. Featuring a range of demanding extended instrumental techniques, this is challenging music, but the players rose to the occasion with aplomb. Joseph Ryan (3R) and Robbie Mackay (L6-2) deserve praise for their notable solo passages. Switching from the intoxicating rhythms of Argentina to eighteenth-century Venice, there followed a rendition of Vivaldi’s Concerto for Two Cellos in G Minor. Featuring Noah Campbell (U6-5) and Sebastian Dye (U6-5) as the soloists, these performers exhibited great instrumental control and dexterity.

In their first major concert performance of the year, the Lower School Choir, under the direction of Lorraine Wild, performed two short choral works – Sarah Quartel’s See the Light and Peter White’s Vent Frais. The choir were on top form and performed with real sensitivity, handling some tricky harmonic passages with ease.

The highlight of the concert was undoubtedly the performance of John Rutter’s Feel the Spirit. Featuring the combined forces of the Lower School Choir, School Choir and Symphony Orchestra, this exhilarating choral work is a cycle of seven familiar spirituals, expertly arranged by the composer. We were honoured to welcome the internationally acclaimed mezzo soprano, Melanie Marshall, to join us as the soloist in this performance. This was a particularly special treat as the work was written especially for her and she gave the premier performance in the Carnegie Hall in 2001. From the rousing opening of Joshua fit the battle of Jericho to the more sensitive movements such as Steal Away and Deep River, this performance was one that will be remembered by all lucky enough to be there. The 200 performers involved clearly enjoyed this fantastic piece, taking their lead from the inspirational soloist. Melanie remarked that this was the youngest group that she had ever performed this piece with and was blown by away by the outstanding level of musicianship on display.

This was a truly fantastic evening of music making of the highest quality and each performance was met with rapturous applause and standing ovations aplenty. 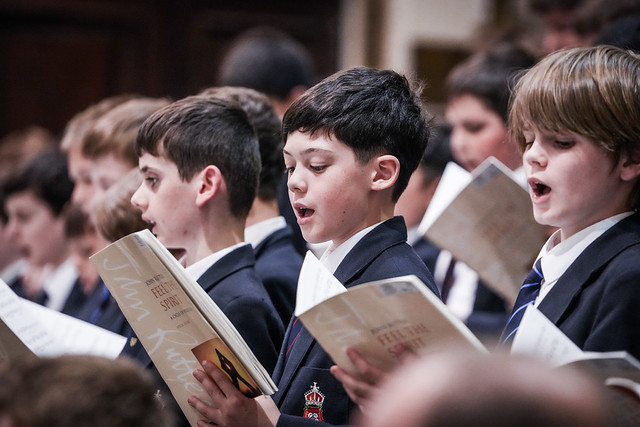 Categories: Music Senior News
We use cookies on our website to give you the most relevant experience by remembering your preferences and repeat visits. By clicking “ACCEPT ALL”, you consent to the use of ALL the cookies. However, you may visit "Cookie Settings" to provide a controlled consent.
Cookie SettingsReject AllAccept All
Manage consent

This website uses cookies to improve your experience while you navigate through the website. Out of these, the cookies that are categorized as necessary are stored on your browser as they are essential for the working of basic functionalities of the website. We also use third-party cookies that help us analyze and understand how you use this website. These cookies will be stored in your browser only with your consent. You also have the option to opt-out of these cookies. But opting out of some of these cookies may affect your browsing experience.
Necessary Always Enabled
Necessary cookies are absolutely essential for the website to function properly. These cookies ensure basic functionalities and security features of the website, anonymously.
Functional
Functional cookies help to perform certain functionalities like sharing the content of the website on social media platforms, collect feedbacks, and other third-party features.
Performance
Performance cookies are used to understand and analyze the key performance indexes of the website which helps in delivering a better user experience for the visitors.
Analytics
Analytical cookies are used to understand how visitors interact with the website. These cookies help provide information on metrics the number of visitors, bounce rate, traffic source, etc.
Advertisement
Advertisement cookies are used to provide visitors with relevant ads and marketing campaigns. These cookies track visitors across websites and collect information to provide customized ads.
Others
Other uncategorized cookies are those that are being analyzed and have not been classified into a category as yet.
SAVE & ACCEPT